For melee Duelist, a lot of further percentages is often obtained from gems like More Accuracy High-quality, which are critical in particular when you happen to be seeking for numerous crucial harm. Also, it’s important for elemental melee builds, which might be very devastating when accomplished correctly. You do not choose to miss a lot of factors when you are facing difficult mobs of enemies that elemental melee builds tend to be met up. 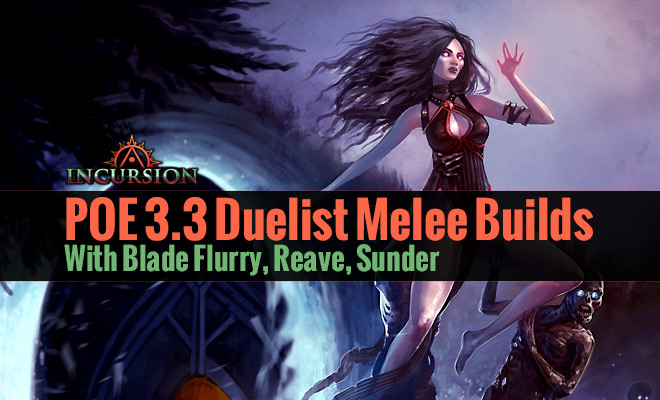 The constructing mechanic remains exactly the same but Slayer ascendancy took some modifications following the revamp, he no longer has stun immunity whilst leeching, this demands you to have at least ~6k life to prevent getting stun even though Facetanking bosses and not to get your leech interrupted. Nonetheless, it’s still an incredibly fantastic Ascendancy.

However, Champion is hunting pretty sweet now, 100% possibility to apply Taunt around the hit against monsters and bosses, make them take increased harm and unable to evade your attack, that is pretty excellent if your build has low accuracy and crit strike possibility. You can drop some accuracy on jewelry to get anything else you like. Verify out the Ascendancy in Skill Tree section; you are able to now play as either Slayer or Champion in this patch.

In Bestiary league, U4gm Gamer used it till reached level 90; you can switch amongst Scaeva and Ahn’s could possibly although leveling, they’re both viable choices. With regards to your gem setting, our gamer also swaps out Inc AOE for Concentrated Effect Help although in bosses, but for mapping, it is possible to replace Inc AOE with something you like (Inc crit multi, Innervate one example is). That rare sword you might have is ok, correct crit and attack speed but the DPS is as well low, at this point, it really is not far better than Scaeva or Ahn’s may possibly significantly. so our gamer recommended just stick to the above for the time being and obtain another rare sword with at the least 300pdps and 7+ crit for endgame.

Pros:
+ Quick to build and to gear, no bleed/poison abuse, just pure Phys.
+ Versatile with skills, can use all 1h melee sword skill, I mainly use Blade flurry for bosses and Ice crash/lacerate/cyclone for mapping.
+ High quality of life with stun/bleed immunity, 20% culling, and endless leech if playing as Slayer. Enhanced Fortify and stun resistance with Champion.
+ 6-7 jewels, adequate to fill in what you lack on gear.
+ No flask spamming in just about every two sec

This Build chooses Gladiator as a result of comfy setup max block 75/75 as well as have alternative+better explosion impact 10% monster hp from Gratuitous Violence compared to Abyssal Cry 8%. Plus you no have to spam warcry as Abyssal Cry build does to have proc-explosion impact, is often passive.

All round gladiator ascendancy got buffed a good deal making all of its nodes are worth to take, thus it provides us much more option to determine how we want to play our builds.

Ascendancy Options
– Currently deciding on Gratuitous Violence path is because of organic setup gear with greater clear speed explosions
– If you would like additional leading block(82%) but you still desire to have bleed-explosion impact, you could possibly choose Violent Retaliation giving up Gratuitous Violence then put on Haemophilia exclusive glove to possess the same influence but slightly less potent than the ascendancy node had
– When you are already playing with Haemophilia but doesn’t care about having the high block opportunity(remain 75%), you could possibly spend your point toward Outmatch and Outcast to possess 10% extra dmg and Blood in the Eyes for bleed effectiveness.

This build attacks with Reave for raw physical harm, but also supports 4 Zombies augmented by Mon’tregul’s Grasp and up to 20 utility-specific Spectral Wolves in the Scourge. What this build also revolves around the Champion ascendancy is for its unique interactions with selected skills and items.

Pros:
+ Uncomplicated to play and new player friendly! You only actively use two skills (Reave and Whirling Blades) in combat, thus allowing you to superior concentrate on your character’s actions.
+ It is low cost! The essential items for this build price about 20c in Common.
+ As of now, I can total T12 maps relatively quickly; my furthest push was T15.
+ I produced this build purely for fun 🙂 As such, I take a far more casual strategy to this build, and I most likely won’t make it a life goal to push it to be Shaper viable (or something from the sort). You are able to view this as either a positive or negative (lol).
Cons:
– As with lots of other summoners builds, it’s slow to level. It is also a late bloomer because the important items in this build cannot be equipped until Level 70.
– It doesn’t do well in groups with other players that Taunt. Considering that Taunt is often an important mechanic within this build, you would like to be Taunting everything.
– If you’re searching for any build which can clear the end-end-game content, this likely isn’t for you personally as this build is not designed to handle uber bosses.

This Build is not a crazy or weird or silly build; it is merely a powerful, fast and engaging all about melee build.
This Reave build has no necessary chase uniques or super significant costly power spikes. You could finish all content on a 2 EX budget, but you may also massively improve your gear to insane levels of DPS to farm Overmodded Guardians or take on Uber Elder.

> Can smoothly farm and finish all content material
> Mapping is leading tier in speed and smoothness
> Pretty flexible and can be modified however you’d like
> No gem swaps needed for bosses, even Shaper!
> Kill bosses fast at the high range – You may kill Forge of your Phoenix boss at 75% of your field with Vaal Reave whilst he channels his explosion.
> No dangerous mobs or mob mods that can kill you – I’ve never died to an Abyss spinner!
> Able to switch off to full quantity gear( 66%) and farm Vault / Spider forest
> two weeks of no lifting still hasn’t burned me out whilst other builds may take one day to become boring even among my favorite classes
> With Leap Slam could even speedrun Shaper
> Cool as HECK dual wield!
> Really defensive whilst nevertheless possessing 1+ mil Shaper DPS – 79%+ Spell Block & Block, 60%+ Evade, 70%+ Phys reduction, 50%+ Base resistances, Immortal Call, 6K+ HP and far more!
> Hardcore and solo self-found viable
> Giant half screen range – biggest melee AOE in the game

This Build is effortless to use Duellist character with the chosen ascendancy of Slayer. It calls for minimal effort to use, won’t give your wrists RSI and only needs a few keys or buttons to press. It’s uncomplicated on the eyes, can do most content quickly and won’t melt your FPS. It is noob friendly, it’s fantastic for casual gamers, and the much more experienced will be able to min-max the bejeezus out of it. It’s a distinctive mix of higher defensive capabilities across the board, with decent DPS and faster than average move speed. It’s the most reliable and most comfy starting build I’ve made use of within the 3+ years I’ve been playing this game. The build can solo the Uber Lab with ease by the time you hit level 70 and nonetheless have lower leveled gems – it is possible to again do this fairly quick even without any on the 4 inexpensive unique’s that the build uses. It’s an excellent all-rounder that will allow you to speed-farm the Uber Lab; farm map’s up to T13 and all other mid-tier content in the game at a fast rate. It decimates breaches, can tank exiles, beyond mobs and invasion bosses, as effectively as survive explosive strongbox and ghost encounters – generating this one on the best all-around cheap builds there is.

Ascendancy modifications revealed. Simply needs us to take the exact same ascendancy selections but in a different order. Have updated that order in the build guide. General we gain a 5% AOE boost, a 30% harm boost, 100% Phys reflect mitigation and for those massive boosts, all we lose is perma-stun mitigation – which we’ll claw back a chunk from via the Pantheon system at this stage anyway.

Pros:
+ Fast
+ Tanky.
+ Above-average DPS.
+ It really is a Phys-attack build which can run Phys reflect maps.
+ Completely immune to Phys indicate enemies or maps.
+ The gear is cheap as chips to obtain.
+ Levelling is uncomplicated, as is definitely the final Kitava kill without the have to have for Twink high-quality gear.
+ You are able to face-tank the entire Uber Lab in under five min¡’s through collecting keys and shrines along the main path. It is possible to do this over and over and over again with primarily no risk of death.
+ Uber-Lab farming will make you filthy rich in some different ways, all through the length of a season. Then back in normal mode, also. This Build is applicable even in 7-day+ race leagues, also.

Cons:
– This Build is not a Guardian-stomping mega-DPS build. You can clear the Guardians and Shaper deathless with a very good understanding in the boss mechanics over the course of 2-4min’s, but most casual players will die at the very least once or twice in those encounters, specifically in they have lower level/quality gem’s, or attempt to completely face-tank the fights.
– It is not as fast as wand builds mainly because It doesn’t have 600% movement speed. It’s nevertheless extremely fast none the less though.
– It’s not as utterly screen-shattering because the 1-shot trash clearing mega-AOE-sized Kinetic Blast builds. It always clears trash very fast none the significantly less though.
– The DPS drop’s off noticeably against T14 map bosses and above. It’s not like you can’t kill them, it’s just a lot more like the bosses go from taking 1-10 seconds, to about 30-90 seconds. The Gorge Map boss on T13 is also a complete pain in the ass due to the constant jumping all over the screen and being able to 2-shot you with his quick leap slams. Obtaining said that though, they are nevertheless easy to kill deathless; they just take much more time.

[Duelist][Gladiator][Sunder] MoM`s bloody Gladiator: when bleed does the job

The main change of this update is Ascendancy rework. And we got severe buffs.
-Our ascendancies now allow us to maim by main attack skill, causing central gem on totem redundant
-we have the small chance to blind by each hit, but 10 % feels also little on bosses, so I suggest to keep blind gem up, but in general, we will see blind more often
-25 % Extra bleed damage-this is really a seriously huge boost, with dual curse setup and reasonable gear (6L and Calcaneus malleus) we will reach 350k+ effective DPS
– Only nerf is that our bleeding does not decrease harm from enemies. How will it affect our survivability is an important question

Pros:
+ low-cost to start
+ great survivability (MoM, block+spellblock, fortify, higher mobility)
+ excellent clear speed
+ can do all content material solo-Shaper deathless, Guardians basic, UberLab uncomplicated, UberAtziri killed
+ bleed may be the main source code of DPS
+ can do ANY COMBINATION of map mods by itself

Cons:
– not god-tier single target dmg
– does not get much from group auras
– I try hard to come across yet another minus